The transatlantic flight came in due course. I took partial responsibility for 1,120 kilograms of CO2 steamed into the atmosphere as a result of my London-Lisbon-New York and Boston-London flights, by offsetting 100%, 28% and 45% of three legs with a payment of 27 Euros to support a biogas project in Nepal run by German climate protection company Atmosfair. To the uninitiated – individuals can offset the carbon footprint of their air travel through a voluntary tax used by third parties to fund clean energy projects in the developing world. To the initiated – I understand that the the moral and environmental reasoning behind this gesture is complex.

Was I merely paying out to salve my conscience, as George Monbiot suggested a decade ago in comparing carbon offsets to medieval indulgences bought from the Catholic Church to absolve the worst of crimes? The last time I indulged thus was before Monbiot weighed in (when the schemes were limited to tree plantation). I read him then, but my ten-year lapse had more to do with a lack of financial resources as much as a lingering doubt as to the efficacy of such projects. This time, though I can’t afford it much more than before, I’m reinvesting my faith in a project focused on Nepal. I admit it, I feel a little better now. Do I imagine myself visiting a gobargas project in the sticks to see if my environmental sins are being alchemized into virtue?

Wryly, I noted the irony of almost missing the trip to the US – which combined a family visit with a talk on the environment of the Kathmandu Valley – because of an outbreak of shingles, quite possibly due to my immunity being compromised by the greening of my diet. The talk itself, to Professor Charles Zerner’s small, engaged class of undergraduates at Sarah Lawrence University in upstate New York, was titled ‘Purity and pollution in contemporary Kathmandu: reflections on Nepali environmental management’. More a study of mismanagement in the Kathmandu Valley, my presentation toyed with the notion that an excessive focus on ritual purity and pollution (courtesy of ye olde caste system) has blinded residents to the immediacy and reality of material-environmental/purity-pollution. The case study was the Bagmati and its tributaries, drawing on the work of Anne Rademacher and others, but it could have been anywhere in the subcontinent. Wherever a holy river is choked in its tracks by an urban conurbation, we find that the holiness it exudes counterpoints the filth its devotees excrete into it – dirty, sacred rivers, as Cheryl Colopy terms them in her eponymous book, newly available in Kathmandu. The fervour of local faith determines whether the symbolic can transcend the material, and in Kathmandu, this is a moot point. To what extent do we still regard the Bagmati a holy river, and how does this influence how we feel about it? Do we have to feel pious to feel at all?

Downtown in The New School, I met Ashok Gurung and several members of the Kailash Cartographies group that visited Kathmandu last year. Radhika Subramaniam and Rit Srestha Premnath, along with Charles Zerner, contributed to La.Lit’s Green Issue, and The New School itself (via the India-China Institute, which Ashok heads) helped fund its printing. But it was another walk with Nitin Sawnhey (mirroring the one I took the Kailash group on, from Thamel to Asan) that really gave me a sense of how some megapolises are renegotiating their paths through the urban landscape. While Kathmandu has unidirectionally obliterated its green spaces in the last half century, some parts of New York at least have resisted the monomaniacal drive of developers. The momentum often comes from the communities, as in the urban gardens of the East Village in Manhattan. How these idiosyncratic green spaces took shape against the odds is a story in itself; I was astonished to learn from Nitin that there are 39 of them scattered across this compact neighbourhood. On this island of Manhattan, then, where space is at such a premium that everything points skywards and where the expanse of Central Park is the moral and geographical equivalent of a national park, people still fight for their scraps of green, land they can communally farm and tend, reaching beyond the potted plant in the corner of a studio flat for 1500 dollars a month. There are 600 community gardens in New York City. Who tends who? 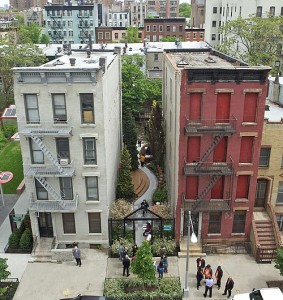 La.Lit, the literary magazine from Nepal